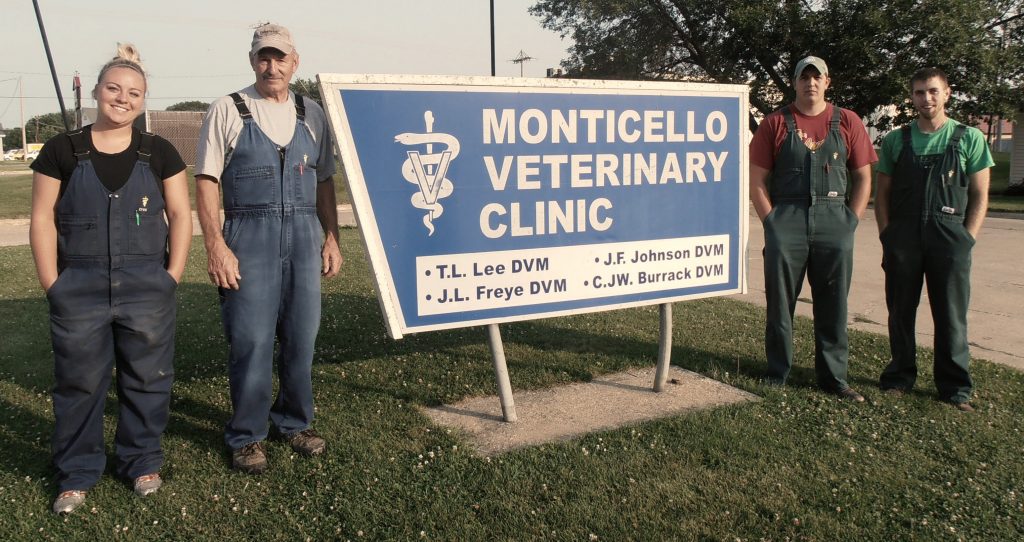 To provide farmers and pet owners with affordable medical treatment and individualized advice that will lead to a healthy and prosperous life for their herd or companion animals. 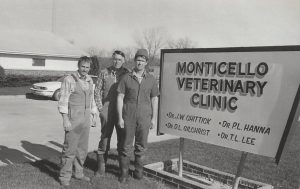 when Dr. John Chittick purchased an existing practice from Dr. Ted Beck. Soon after, Dr. Gilchrist joined the clinic and the two became well-known throughout the Monticello community, with the clinic’s primary focus being production animal medicine.

The two owners constructed the building that currently houses the Monticello Veterinary Clinic in 1972, and Drs. Phil Hanna and Tom Lee joined the staff in 1974 and 1981 respectively.

With advancements in medical research and technology, the clinic has continually improved its equipment and treatments to best serve area farmers. In addition, as the Monticello area has grown, the clinic has expanded to offer medical services for companion animals in addition to production animals.

When Drs. Chittick and Gilchrist retired, the clinic made several new additions to the veterinary staff. In 2013, Dr. Cole Burrack joined the Monticello Vet Clinic as Dr. Hanna retired. Dr. Jayme Freye and Julie Jones, RVT began their careers at the Monticello Veterinary Clinic in 2014. The clinic saw the addition of their second registered veterinary technician in 2016, Aubrey Raymond-Schmitt, RVT followed by Dr. Mark Duffy in 2017. Dr. Lee retired in May of 2018 after a 37 year career at the Monticello Veterinary Clinic. At that time, Dr. Jillian Becker came on board. In 2019 Natie Attig joined as intern/kennel attendant and soon became a full time veterinary assistant. Dr. David Lange came on board in the fall of 2019 as well. The most recent addition has been Allison Kelchen in December of 2019. Allison has joined our team of support staff.

The Monticello Veterinary Clinic still has some familiar faces. Diane Fitzsimmons has been a member of the support staff team since 1986. Diane Leibold joined full time in 2003 and Pat Adams has worked the weekend shift since that year as well.

Over the years, the clinic has enjoyed providing medical services to area farmers and pet owners, as well as being actively involved in the Monticello community. As always, the clinic encourages continued education and learning in all its veterinarians in order to provide you with the best possible care for your animals.

Font Resize
Contrast
Accessibility by WAH
Call Us Text Us